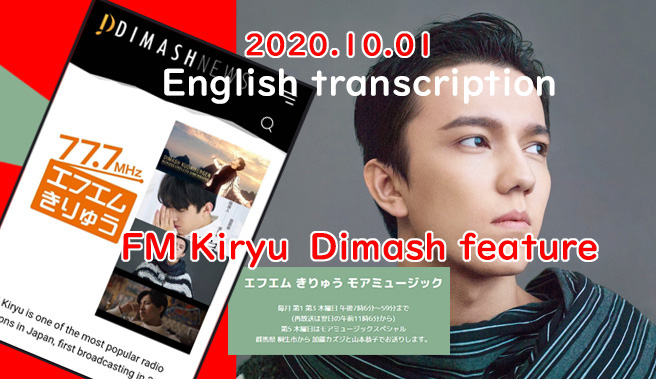 FM Kiryu is one of the most popular radio stations in Japan, first broadcasting in 2007.“More Music” is a program that introduces good music from all over the world to its listeners and broadcast twice a month.

↓★English translation of the program from here

“More music”, this is informational program by music.
We want to present the music that touches your heart.
It present by Kazuji Katou and Kyoko Yamamoto.

Good evening! This is Kazuji Kato.
Сәлем！Здравствуйте！ I am Kyoko Yamamoto.
Oh! You cool
Yes, I am LOL
We are introducing great musics from all over the world.
Here is lineup of today’s program.
Our “Pick up Artist” corner…This time we have a special program of Dimash Kudaibergen from Kazakhstan.
It is more special that we could have an extended time for him.
And “World music scene” is Minas Gerais Music from Brazil.
Last of program will be “Best hit memories” features Yoko Takahash’s “Fly me to the moon”, the ending theme song of “Evangelion” from 1995.

Now here we go to “Pick up Artist”
We pick an artist of people’s interest and new trends.

Today…Here is a Long-awaited Dimash.
I wonder if Dimash fans already started sobbing with this background music.
This song was played in June when we aired as one song of “Kazakhstan special”
“Screaming, it is
And this time, as we had a lot of responds from Dimash fans and even contacted by Dimash Japan Fan club.
So we decided to have more songs of Dimash as our “Pick up artist”
First, we want to introduce little bit about Kazakhstan.
It’s in middle of Eurasian continent, Next to Russia in North, Uzbekistan, Kyrgyzstan and China in South and it’s a biggest Landlocked country in the world.
it’s 7 times bigger than Japan.
And Dimash Kudaibergen…Born in 1994 in Aktobe, Kazakhstan.
He is 26 years old now. People found his talent since very small.
And he was growing up in a blessed music environment.
He kept gain his musical ability with his hard work.
And this year, he has entered the master degree of Art University of Kazakhstan.
He already have a huge success on his career since his young age.
Especially in 2017, he was participated on Chinese TV problem and he was In the limelight overnight .
We could find so many “WOW” videos when we searched on YouTube.
I saw ppl’s reactions there during these performances and even some ppl were almost crying.
Now we have the first song…
We are rushing with our talk since no enough time for our talk.
This is the main theme song from Italian Sci-Fi movie “Creators- the past” by Piergiuseppe Zaia.
This movie was supposed to published in publics on March but caused by Covid-19 pandemic,it was cancelled and finally it will be showing for the first time in the theater on October 8 in Italy.
As I checked the PV of the movie, there are many thing happening there..
I mean there is a Russian girl, Kristina Pimenova who was once told by ppl as a most beautiful girl ever.
it was when she was 12 years old and she was started her career as a model since she was 5 years old.
Now finally we go to the first song of Dimash.
We had a many requests for this song from his fans,
“Across endless dimensions”.

We are now slipped into the Dimash’s world…
As we learned the director, Piergiuseppe Zaia was composed all soundtrack music for this movie.
He used be working in the field of classical music as a composer.
I can listen the song with mixed genres I think and he needed 3 singers to sing when he had to make a demo recording and send to Dimash.
I guess 3 singers were not enough for cover this song.
I personally believe that it need 4 singer for it baritone, tenor, alto and soprano…
I wish we can see this movie in Japan, too in future.

OK, still we are rushing…
here is second song, little emotional song.
This is the theme song for Chinese TV drama”My idle” in 2018 with Korean composer
Its getting more emotional in the end of song.
“Restart my love”

This song sung in Chinese.
I can feel that he really can fit even in Japanese TV drama, too.
We should ask Dimash to sing for them(Japanese dramas).

Today we are having Dimash special…
and I have to say that we can’t cut the song to short
we can’t miss any piece of it since all his songs are like one “Drama”.
We can’t make it fadeout ending as we always do.
So, we have to cut off our talk to save the time.
About Dimash and Kazakhstan, we learned a lot from Website of Dimash Japan Fan Club.
There are so many contents with very small details.
We feel full of love for Dimash with it.
It’s a Japanese official fan club like many other fan clubs in each country over the world.
Nowadays, it’s easier to have communications with the other fans in the world through the internet.
We had a some conversation with Dimash Japan fan club about this program during preparing
and they told us that our program was introduced by his news site "DimashNews"

even they will translate our talk for sharing with all his fans.
Please visit to the website and their fan club website to find more information about Dimash.

The third song, it’s a controversial theme I think
Very deep and meaningful.
Dimash as composer/write of this song with Chinese help for lyric.
”War and Peace"
I believe that his strong belief and thought about “War” and “Peace” might be in this song

it was “War and Peace”

I have some lyric here of this song.

He sing with a deep thought.

Now it will be the last song.
Many ppl requested his song in kazakhstan.
Yes, he is singing with many languages
But of course his mother language is Kazakh.
It says Akkyum…?
Its mean my swan.
This song was sung in 2000 in the theater drama in Kazakhstan
the beautiful specific flute and Dimash scat singing the ethnic atmosphere melody
it’s has a dramatic atmosphere.

This time we have a lot of comments and requests from many fans.
There are many songs which we couldn’t play even we got many requests today.
Like “Olimpico”"S.O.S"and “If I never breathe again” which we using as background music now
Many ppl requested us these songs.
So, I hope we can play these songs next time when we will chance to have another “Dimash special”
We are still in affected of Covid-19 but we wish soon his concert tour will start again
and since he came to Japan last year, we all expecting him to come back to Japan once again…for his concert.