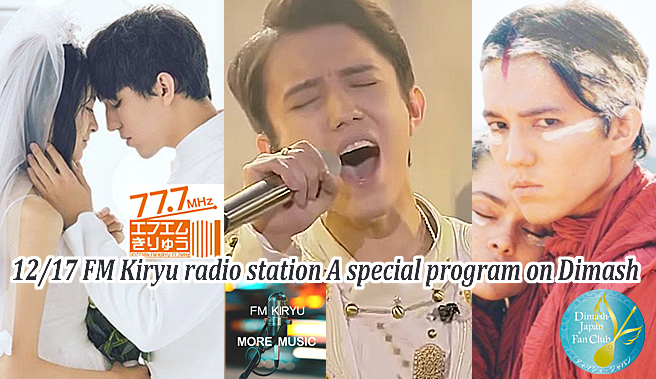 On December 17, 2020, the second Dimash special feature was broadcast on the program "More Music" on the Japanese radio "FM Kiryu".

This article is an "English transcription" of the broadcast.

※The broadcast source (about 30 minutes) is at the end of this article. (Allowed by radio station) 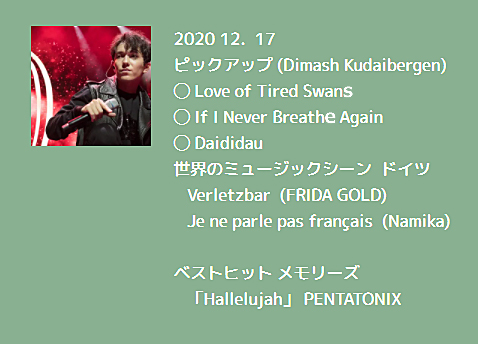 "FM Kiryu a local production program Gimi Break
This program is created by people who love our city, we are playing the leading role.
k, y: "More Music" This broadcast is the music informatial program. We will bring you the music that touches your heart.
Kazuji Kato and Kyoko Yamamoto will be as your host. Please enjoy with us."

ｋ：Good evening, I am Kazuji Kato.
ｙ： I’m Kyoko Yamamoto, How do you do?
ｋ：It’s getting cold these days.
ｙ：Yes, it is…The cold wave just happened suddenly. There are 2.08m of snow lay around the Fujiwara Dam in the northern almost over night…it is crazy..(Yes, 2m is crazy!) In Kiryu, we don’t have snow but the air is very cold (Say, it’s a bone chilly) soak into bone…

ｋ：Okay, so let’s go to our menu tonight (Y: Here we go)
ｋ：The pick up artist corner, it is second time…Dimash…a special feature of Dimash from Kazakhstan.
ｙ：Yes, and “World’s music scene” is?
ｋ：We have from Germany today (Fumm,It’s been a while)
ｙ：And last, “Best hit memories” is?
ｋ：We will present you “Halleryah” from Leonard Cohen (Ohhh) by chorus group Pentnix。
ｋ：Now we are enter in “Pick up artist” cornaer！
BGM "Screaming"
y: ”More music” Pick up artist corner
ｋ：In this corner, we will introducing you the artist who is in a topic these days.
ｋ：Yes, so Dimash…
ｙ： It started like this is the corner only for Dimash (laugh) The BGM (Both laugh)
ｋ： Ye, yes we made this BGM specially for today. (We made it only for today)
ｋ： I will briefly introduce Dimash since some people may not know him yet.

He is a singer of Kazakhstan, still 26 years old and he already got an attention from all over the world.
It because of his outstanding talents.

Y：Yes, it is… (say..) His ability as a singer…and even his looks….it’s worldwide.
ｋ：So I just want to saying that there is no point to think him is just a great singer. . He is not at that level…Anyway, he covers the whole ranges that human beings can produce. He makes me think that human beings can do such things, you know? , but…no word (yes).
Last time we played his songs on October 1st for 4 songs (yes 4 songs). This time, we will feature some more songs that could not be played at that time. (Yes)

ｙ：We want to play many songs, but sadly there are not much sound source available….
ｋ：No, there are not…( It is a hard part for us)
There are so many on YouTube, but mostly are not officially released as a good quality sounds.
There is a copyright issue, but out of it, the sound sources are very poor compare to released album.
ｙ：Hummm, the sound are too poor to using for on air.
ｋ：Many sound layers are missing…so, we can’t use on the radio.

ｙ：Since we present a Dimash special program, we want to present them to the listeners with good sounds.
ｋ：It is right, as you said…

Okay, now… the first song.
This is “Love of tired swans”
ｙ：Oh, sounds good as this winter season…
ｋ：I heard that there are many songs features swans in Russia.
This song was composed by Igor Krutoy.
Y：I guess that he is a leading figure in Russian music scene.
ｋ：He is a composer who is a major figure in Russian music world and has a dominance in the Russian classical music to pops, and between. Anyway, he makes a lot of famous songs in many genres. When I often watch Dimash's Youtube live, a dandy gentleman is playing the piano. (Oh, yes yes yes)

ｋ：His smiling gets me slightly…
ｙ：So he is Igor Krutoy who composed this song?

ｋ：Dimash was singing “Adagio”at “New Wave contest” which is organized by Igor Krutoy on September 2018 and since November 2018, they are started work together.

Actually, he composed this song for Lara Fabian who is Belgian female singer in 2014. Dimash also sing with same backing chorus as her…it mean he is singing it in same key as she sings. 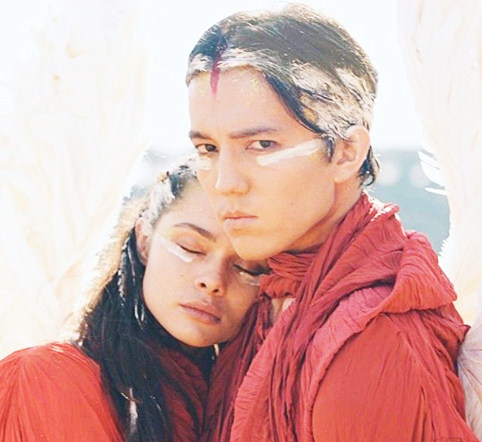 ｙ：He is singing this song with same key as she sing…
ｋ：Yes. the first half part he sing one octave lower than the original, and switch to original keys from the middle part of song(Yeah). The scat part at the second half, this is probably Dimash's original, but that part is raised by another octave (Ohhhh). From the lower E to the upper E, Dimash sings with 4 octaves in this song. 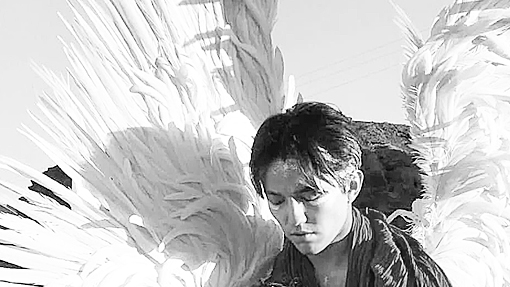 ｋ：“Love of tired swans” by Dimash. It was so amazing.

k：Now we are move to second song…. “If I never breathe again”

I was going to play this song from many people’s request last time. Well, there was a slight mistake…
I was planning to play half way (y: lol). But for some reason, it turned out to bplayed a different song, and actually it was very rude what I did, but I'll play it this time for you.
This song was sang for mini drama that his girlfriend was in a vegetative state because of an accident. He is a boxer, and he earned fighting money then he freezed himself with her until they find cure, and hoping to get together again. 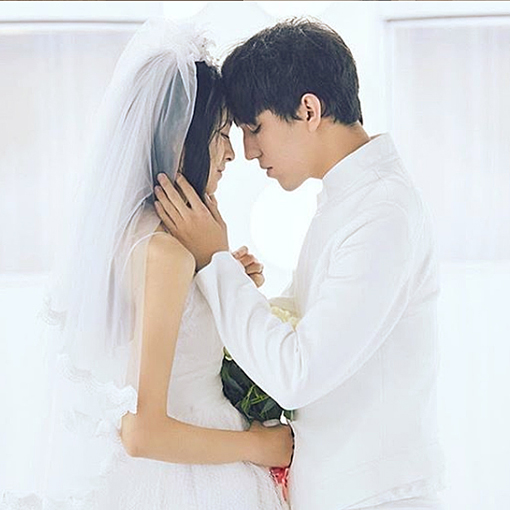 This song is included in the album "iD" which released in China. Here we go… 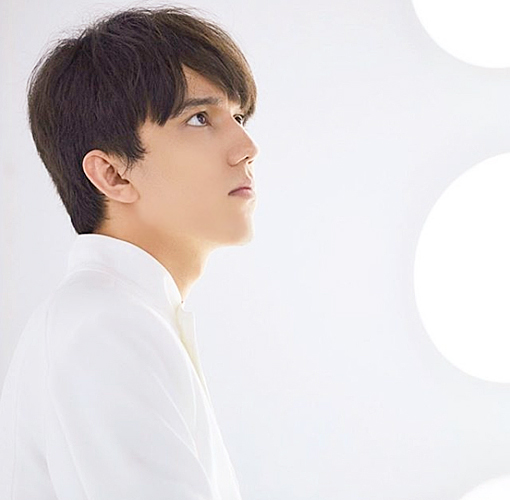 ｋ：This is a love song, and i can feel his varieties of expressive in this song.
it is a very emotional song by putting out various ways of uttering with phrases to phrases.
Oh, it will be the last song already…

ｙ：Dimash made us feel…. I means I feel the time passed so fast during we enjoying his singing.

ｋ：Ah…. We will present you for the last… "Daididau"
ｙ：Yes, Daididau… it’s Kazakh, isn’t it?
ｋ： Fummm… yes, and no… or yes… ( really?) I heard that is mysterious word…
It is Kazakh song, Song of Kazakhstan.
Dimash was singing this song at ABU music festival in 2015 in Turkey as represent of Kazakhstan. Daididau.

Then 2 years after, he was singing this song at Chinese program “I am Singer” in 7th episode.
This song might be very special meaning and longing for him to sing in Kazakh language on the international stages. 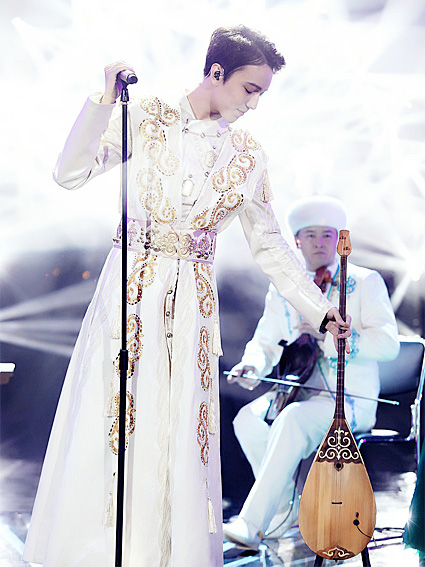 Let me explain about the behind story of this song little bit.

In 1938, there is a poem written by Magzhan Zhumabayev(1893-1938) who was a political prisoner at the time in kazakhstan and later it became a theater play and spread to the public.

They said the word “Daididau” doesn’t fit to any language…

I asked about it to the person from DJFC(Dimash Japan Fan Club), she said it could be a name of his wife since it said Daididau-ai (ai means a dear), like my dear Daididau.

However, Magzhan was executed after awhile, and even the people involved were arrested. It is possible that he hid its name so that no one could tell who she is. (Oh)
In the song, he was informed that "Your wife is gone, she's gone, she's gone somewhere."
He was deeply heartbroken and write this poem.

Y：Well… I guess this song was written during his most difficult time.
ｋ： I agree, Actually, this song was originally very simple Kazakh folksong, but I think that Dimash brought this song turned more beautifully and emotionally. 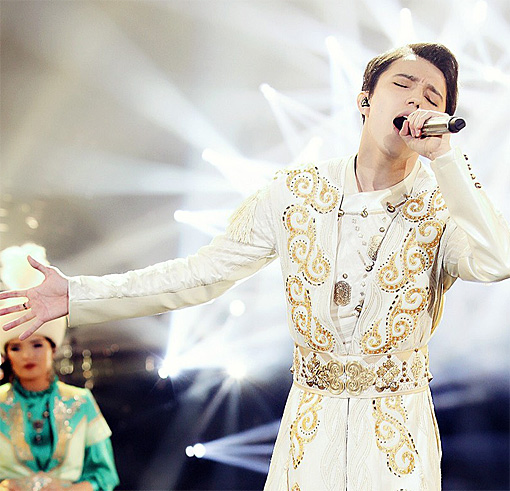 It was in 2015 that he participated in the ABU Song Festival in Turkey. And in the same year, he made his original song called "Unforgettable day", I think by the time of 2015, he already build up his musical style and stractures.
So I believe that this song also brought up to the Dimash’s world by him singing.

The actual performance (of the sound source) had an ensemble of Kazakh folk instrument Dombra before the song. But we play only the song part today.

ｙ：Oh, I know…the one with many Dombra players in it. (Yes, it is)

ｋ：Since it is a live concert sound source, when he point the microphone at the audiences… so there is a part that his voice suddenly breaks, but it was not that he forgotten the lyrics (Yes, at concert) Yes, it’s a live (it has a live feeling), it's live. 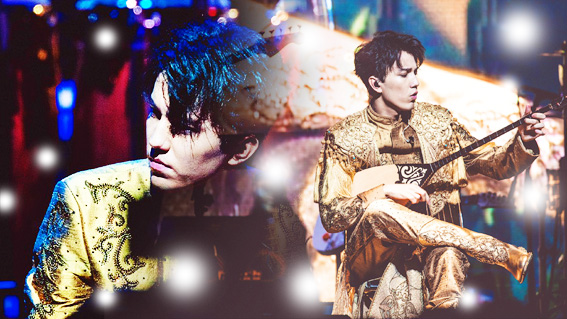 ｋ：This is the one song that was posted on Dimash Japan Fan Club's blog just yesterday, the content of this song. (Yeah yeah yeah)

I've retweeted it on our “More Music” Twitter account, so i hope that you will check on this.

ｙ： I think you will understand more deeply about this song.

ｋ：Yes, they put it together quite detailed.

ｋ：Anyway, there is a tremendous amount of informations( I also thought it is awesome, vow down, too)
Well, finally…it was (yes) the brought you Dimash special for the second time.

I felt that it took longer than I expected. Miss.Jasmin tea asked me for impression about Dimash again but… you know? “It’s just amazing” is the words as I repeatedly said during this show…

ｙ：Tomorrow morning, NHK BS PREMIUM's program “Let’s go! Far away ! Unexplored regions x railroad" our train will entering to Kazakhstan from Uzbekistan . It's a morning program from 6 o'clock, so if you can, please join them.

ｋ：Sure
After all again, we presented you Dimash from Kazakhstan as our “Pick up artist”
BGM If I never breathe again ♪

※ ↑ Please refrain from copying this sound source without permission.