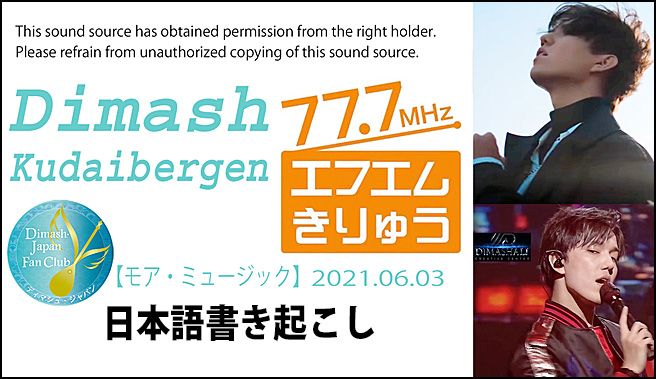 The second "More Music/Kazakhstan special feature program" was aired by Japanese radio station "FM Kiryu", and they featured Dimash's "Be with me" and "Know".

◆ This article is an "English transcription" of the program(introduction to Kazakhstan).

◆ The radio sound source is at the end of this article. (We are permitted ) 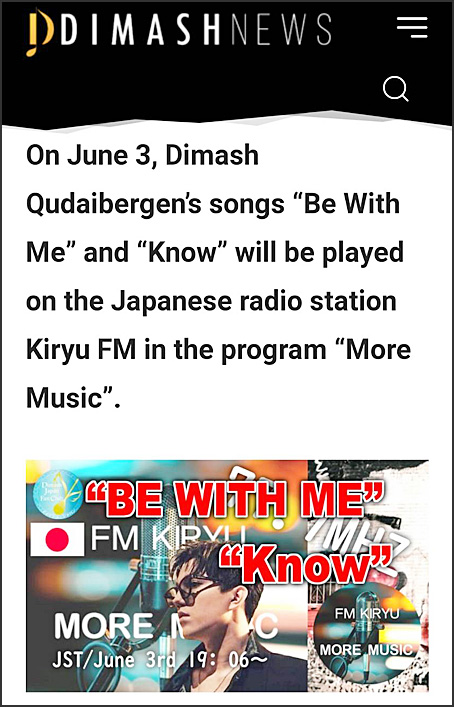 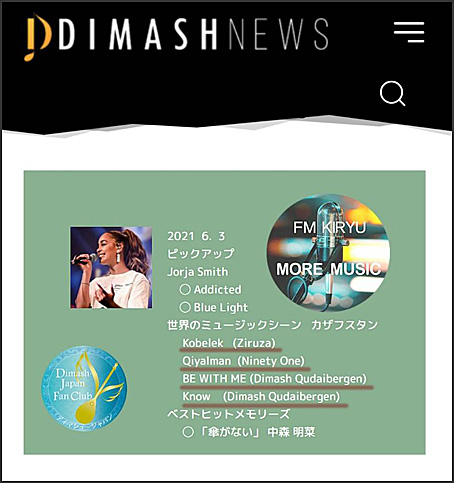 "FM Kiryu
Give me a break
This program is create by people and the city of Kiryu.

Kato: Yes, it’s been a year already… we finally reach to Kazakhstan again.

K: Ah… Today we have Dimash once again… we are going to play 2 Dimash songs, so we don’t have much time for our talk again.

K: We start with the pop music from Kazakhstan, she is a singer song writer and also an actress.
Ziruza… and her song “kobelek”

This is a hit song from last year.

And she is making a sound when her breathe in.

It make the feel like it is already part of singing…

I would like you to give an attention to hear it, too.

K: Yes, it is.
It sounds very sophisticated and modern, I guess it’s little far from our ordinary Japanese impressions about Kazakhstan music.

Y: Yes… we have no much chance to listen music from Kazakhstan.

K: It’s just different language but not too differences in music styles.

K: It’s very sophisticated sounds.
Now, here is Ninety one which is said to have revolutionized the Kazakh music world.

Y: Yes, next artist… Ninety one

K: I guess you know about them well?

Y: No, not much….but this time I listened few musics since I was wondering about the music scene in Kazakhstan.

And I found out that the Kazakh government is giving support to bring new Kazakh music to the world.

Their name Ninety one came from their country’s independent year of 1991.

K: Kazakhstan was independent from Soviet Union in 1991.

Y: I was wondering if they are aiming the pop music fame like BTS in Korea.

K: In fact, Right now Kazakhstan trying to using Roman alphabet instead of Cyril alphabet and since Қ in Cyril turn to Q, so they calling Қазақ(Kazakh) pop “Qpop” like Korean pop called “Kpop”.

And Ninety one fans started call Qpop around the time.

Today we have a new song from them…

I just realized that sounds more pop than before.

I remembered that their music is more Electro sound.

Y: I was wondering about their change of style.

There are singing and rap parts for each members.

Like having a dream or just a dream by its meaning.

I think its about people depending on internet
and it’s ending with the word from mother that saying “You are a Netflix(net-freak?)”

The days are passing by and many sleepless night, another thriller that took everything away…. the lyric goes like that.

It is the song about deep living in the internet world and away from the realities…something like that.

Y: These days there are many talked about it.

K: I feel like that their changes to band sounds might be need to feel more human touch after this long pandemic period without meeting people…?
OK, now… Ninety nine “Qiyalman”.

It is fun song.

K: It sounds very cheerful and healthy sound more than I expected.

Now we are step into Dimash…

This is 5th time we picked up Dimash.

I will briefly introduce him.

He is a national and international super star born in Kazakhstan.

His vocal range is more than 6 octavos.

He can sing rap, rock to opera and expressed at a different dimension level.

The vocalist of miracle.

He has a great respect and love to his mother country, and going on the path of music.

He came to Japan for the first time in 2019 for participated to ABU music festival in Tokyo.

About songs for today,

First, his newest single released last month “Be with me”. 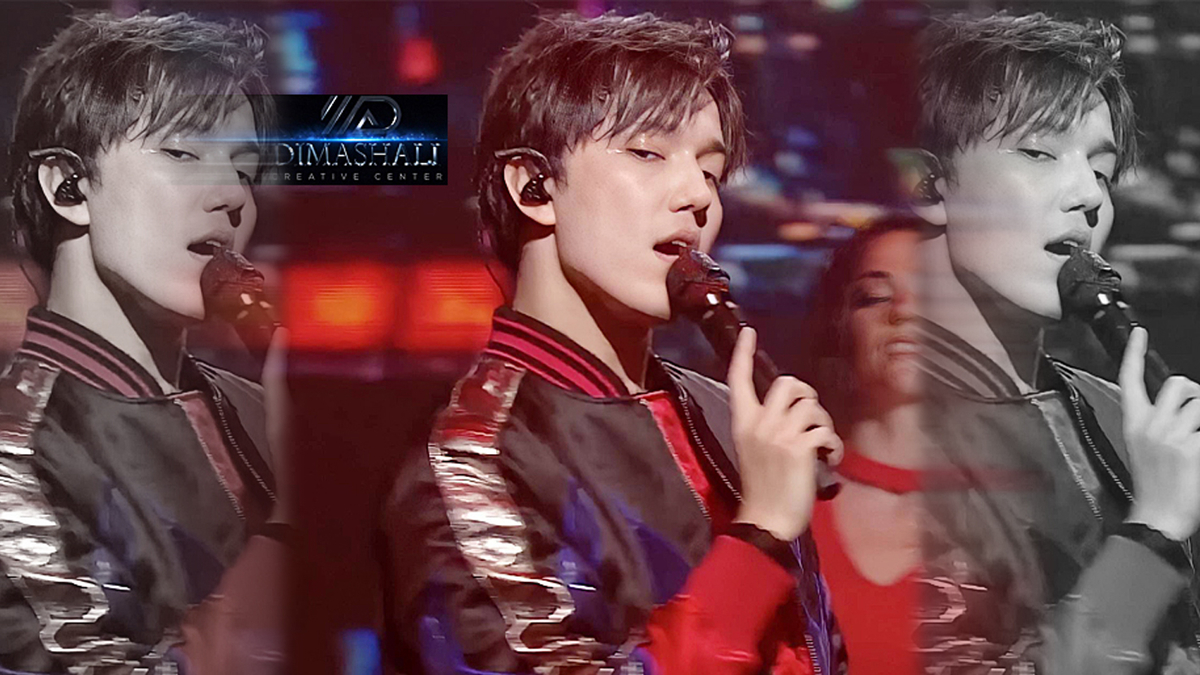 Y: I was thinking like ..ah of course Dimash can sing this genre, too.

K: Yeah…he can do anything.

He can sing with almost every voices that human can imagine, from bottom too high.

He just can sing with all kind of voices… and even beyond.

Y: Yes, yes… and he grabbed my heart with pool scene on his MV. 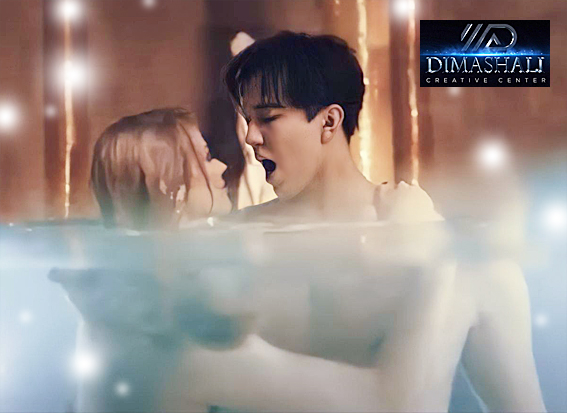 Y: Oh my…I am like, he is so attractive!

K: And very good at physical abilities, too.

At luxury hotel…rescue…? or get the beautiful girl from villains. 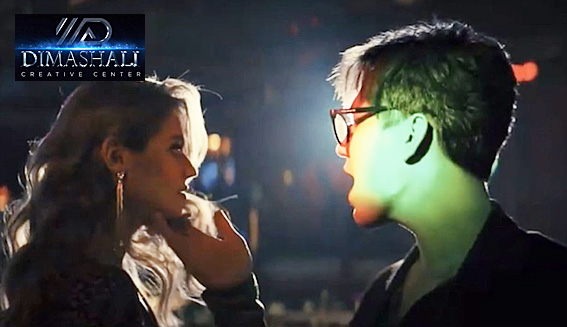 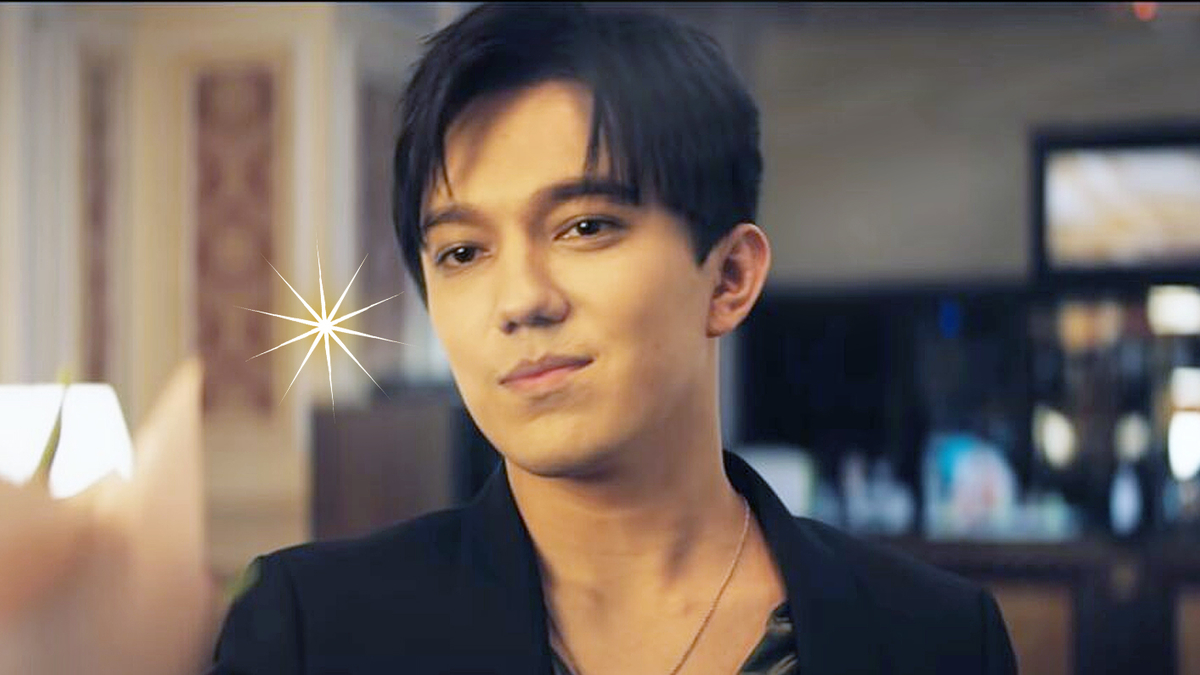 K: We can hear some sighing voices and I believe that are woman’s voice.

BUT, I think everything else are all from Dimash.

If the other rappers/singers singing this song, they need 10 of them with each has a different characters.

I just want you to remember that he is singing by himself during you listen it
Then you can realize how he is amazing this way.

K: It was Dimash’s new single Be with me.

I heard that Dimash is admiring Micheal Jackson so much.

I can think this song as homage to Micheal.

This song is totally different with the first song.

It’s in Cyril alphabet and its very hard..

It meaning as “I understood” or “understand” …?

Just one word but has many meaning I think.

This song was composed by Russian composer Igor Krutoy.

I found the pronunciation as Igor or Iguru…something like that.

Thank you so much for every times…. 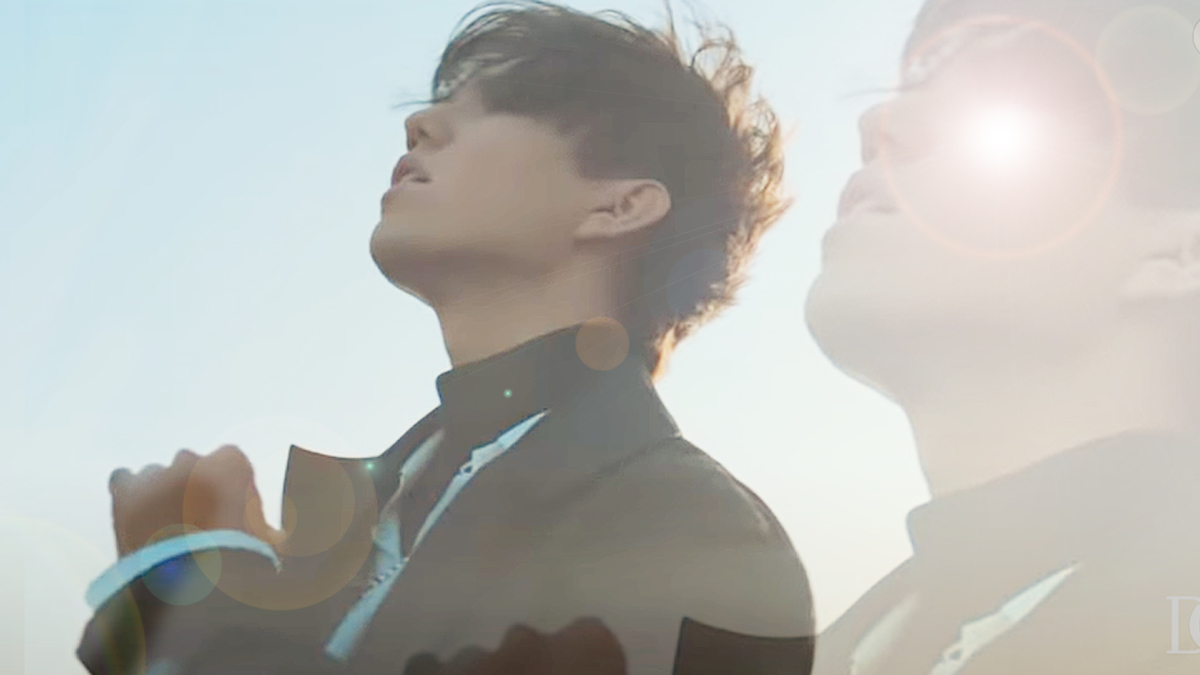 Love of tired swan that we picked up last program was composed for Lara Fabian, too.

“Know” is included on her album in 2010 and she sang in scat(Vocalize)
there is no lyric.

He sang at several concerts already. 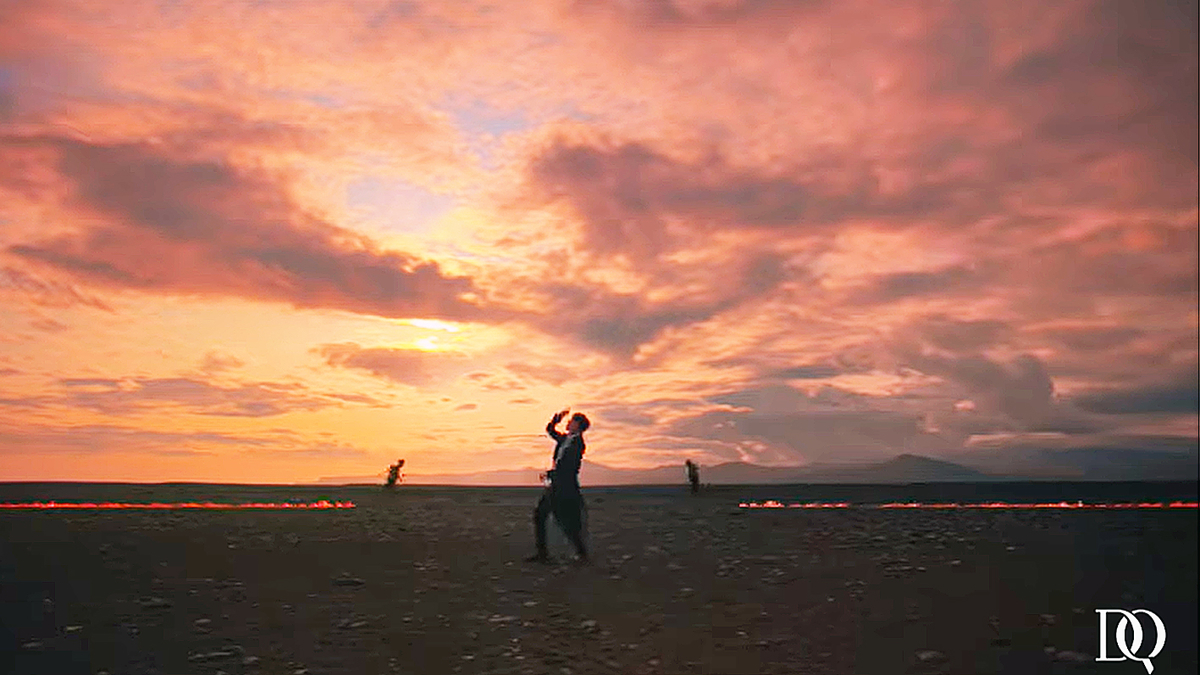 But little by little getting more dramatic toward to the end as a climax.

In the beginning, we heard Armenian flute duduk, it’s a Reed instrument.

It’s sound give us nostalgic feeling with one continuous tone of melancholic
In last 1 minute, Dimash’s voice is just amazing… 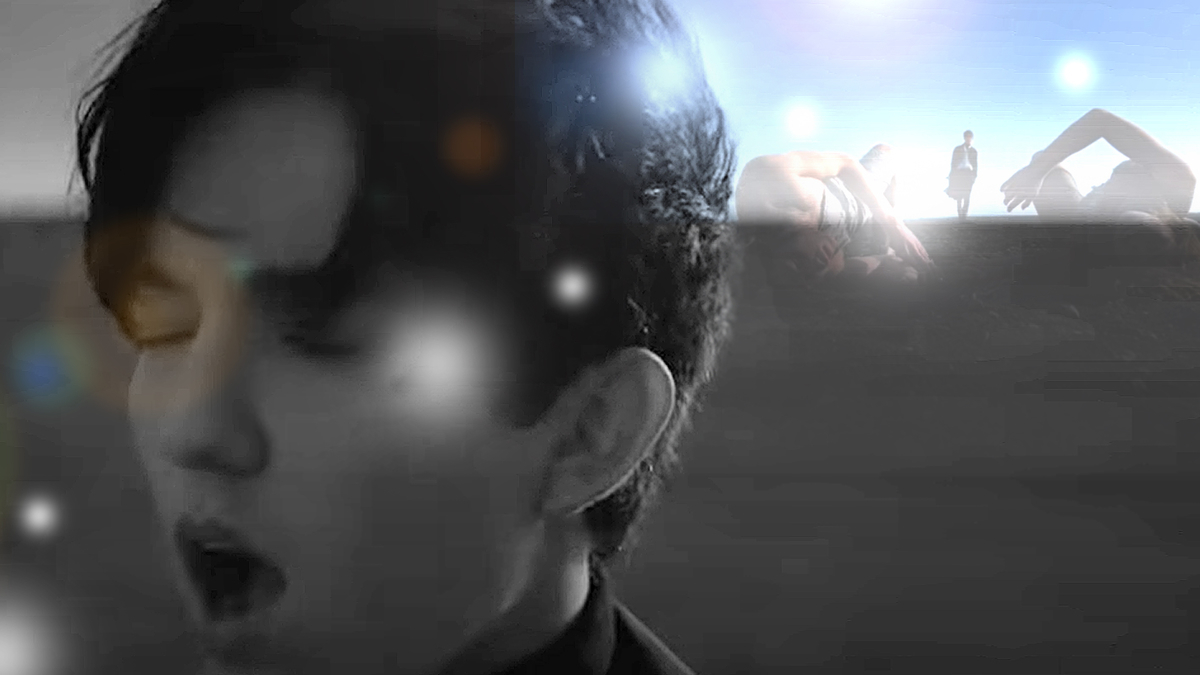 And I have to remind it again, it is extradinally human voices laying to the end.

K：It soothing to the heart…

We presented 2 of Dimash songs.

Tonight, we have the music scene around the world is from Kazakhstan.

↓ ★Sound source (We are permitted )with English subtitles

※Please refrain from reprinting this sound source and images without permission.